TOPEKA — “Vaccines are the leading cause of coincidences.” That is a meme going around on Twitter. One family is circumventing the inevitable propaganda by stating the facts on their loved one’s obituary.

Ms. Jeanie Marie Evans received the first dose of the experimental mRNA shots against COVID-19 yesterday, according to the Kansas Department of Health and Environment (KDHE). It’s unclear which experimental shot the 68-year-old received. But Kansas has very little supply of the Johnson & Johnson experimental viral vector shots. Thus it was most likely Pfizer or Moderna. Both experimental mRNA shots are currently still undergoing clinical trials until as late as 2024.

She received the shot in Jefferson County, Kansas. Ms. Evans immediately suffered anaphylaxis, a severe allergic reaction, during the 15-minute waiting period after the experimental shot. She was transported to Stormont Vail Health in Topeka, where she was pronounced dead. The family immediately published an obituary that states her cause of death. 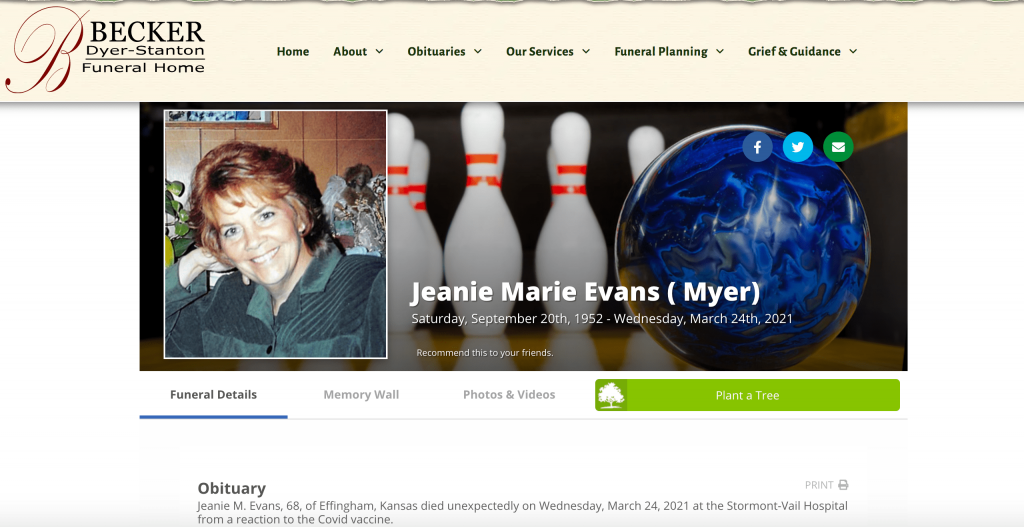 A KDHE spokesperson said, “Until the investigation is complete, it is premature to assign a specific cause of death.” Ms. Evans lived in Effingham, Kansas. She served on the Effington City Council and was an avid bowler, according to her obituary. Funeral services are Monday, March 29 at Becker-Dyer-Stanton Funeral Home in Atchison, Kansas.

Everyone reading this article knows exactly what the KDHE and Centers for Disease Control (CDC) will say about this death. “The vaccine did not cause her death” will be the official statement despite Ms. Evans dying mere hours after an experimental mRNA injection. The agenda is clear.

Objective reporting cannot be expected from mainstream media, in Google searches and/or social media platforms. They are all working together to fulfill this agenda, silencing all dissidents in the process. Stay vigilant and keep spreading truth to friends and loved ones even if they don’t listen to you at first.

The MSM simply writes off any vaccine deaths as being a net benefit overall. They don’t care about individuals

Resistance to being COVID vaccinated IS obedience TO GOD! DO NOT TAKE THIS POISON INTO YOUR BODY!!

It’s so sad that people are trusting in something that will actually harm them.

the world locked down to save one life. Now, nearly 6,000 deaths and hundreds of thousands of severe side effects (including Europe) from these deadly jabs, and the powers that be (PTB) say it’s a coincidence.