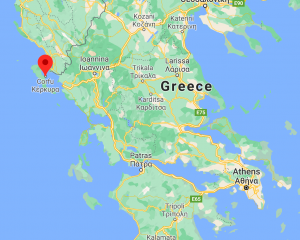 CORFU, GREECE – A Greek nurse is now paralyzed after receiving a second dose of mRNA. The 40-year-old nurse is a mother of two and has been a nurse for 17 years. The nurse, whose name has not been disclosed, developed a fever, followed by excruciating pain throughout her body immediately after the second shot. She was rushed to the hospital when she was unable to move or feel her lower extremities.

Michalis Giannakos, President of the Panhellenic Federation of Public Hospital Workers (POEDIN), told Open TV in the East Attica region that X-rays came back clean. The nurse is now undergoing neurological assessments. Giannakos said the nurse “was in perfect health” prior to receiving the second mRNA shot. It is believed that the nurse developed Guillain-Barré syndrome. The neurological disease causes the immune system to attack nerves throughout the body. Giannakos said the nurse is now wheelchair bound.

He defended mRNA shots to an extent. But his human side displayed genuine passion for his injured colleague.

“We do not say anything bad about the vaccine, on the contrary, but the colleague is in a wheelchair and can not get up and has been terrorized,” he said. “I am fully aware of what I am saying. Doctors there also say that it is a side effect of the vaccine.”

It is unclear if she received the Pfizer or Moderna shots. But as of today, Greece has received nearly 800,000 Pfizer doses and 135,000 Moderna doses.

Criminal charges for reporting the truth?

The Prosecution of the Court of First Instance is considering pressing criminal charges against Giannakos. Greek media outlet Ethnos is reporting that a prosecutor is investigating if Giannakos committed the crime of “spreading fake news.” His crime is expressing an mRNA adverse effect with “too much certainty.” We’ll continue following this story for updates.

This vaccineis not a normal vaccine,like ones we have had before, TBIS does skmethi g to your own immune system it takes over, so many people have d iued after having the vaccjne,and many injured, yet they keep on with it, and cover up, have these people no conscience at all….They are comp,I sit in peoples deaths and injuries…Crimes against HUMANITY….

CASES NOT DEATHS! EVENT 201 proves this was all a PLANNED FARCE! Understand that Epstein GUILTY Trumpy is a deep state FAKE like all others before him and gave Gates GAVI group a BILLION to FORCE a vaccine on YOU using the MILITARY in a ‘powerful way’ Gates controlled and funded Fauci AND Birx and they ALL should be EXECUTED.

They did this and WOKE YOU UP. They did us all a favor, whether they intended to or not. None of us can trust ‘authorities’ ANYMORE. Executing anyone won’t bring back the dead, but unseating the powerful will prevent others from meeting the same fate.

they get more bold every day.

Thank you for your diligent efforts to keep people informed. Vital to freedom

All the adverse effects and deaths reminds me of the 1980s and 1990s when the link between vaccines, cot deaths and autism was denied.

Here we see an anonymous civil servant wanting to prosecute a named whistle blower who puts truth above political correctness.